Before moving on to our 11th national park, we felt it had been too long since we had imposed on our family’s hospitality. Halloween day, we arrived at Jason’s cousin Anna’s home in Queen Creek, Arizona, just outside of Phoenix. Indi was thrilled to hear that she would actually be able to spend Halloween night in a real American neighborhood, with real American Halloween candy and portions, and with Anna, her husband Aaron, and their boys Landon and Mason. After a few trips to the thrift store, Indi put together a fabulous costume and she reveled in her first Halloween in the States.

Getting all growned up

Before wearing out our welcome, we moved onto our next family members, Jason’s Aunt Marilyn and Uncle Ron in Phoenix. Anna and Aaron were generous enough to keep Indi an extra night so we had a whole evening of just grown up time. Not sure if Indi or we were more excited about this prospect. Both evenings spent at Ron and Mare’s were filled with lots of laughs, stories of Jason’s Aunt and Uncle’s amazing adventures–both as travelers and life-long parole officers–Ron’s amazing cooking (homemade Pad Thai and salmon he caught in Alaska this summer), and enough drinks to make Mare worried about passing her yearly physical the day after we left. What an amazing family we have! During the days we checked out the Arizona Science Center and Mare took us on one of her favorite hikes with views of Camelback Mountain as well as the sprawling Phoenix suburbs. We were sad to go but Joshua Tree was calling. 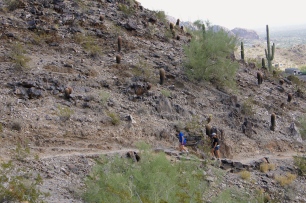 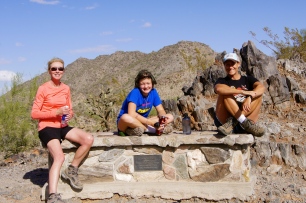 Our longest day on the road (320 miles) brought us to our home for the next three nights, Ryan Campground in Joshua Tree National Park. Jason discovered this little gem in an article in Sunset magazine. What a fantastic recommendation! Nestled next to one of the many huge rock formations found throughout the park, the locale provided Indi with endless climbing opportunities… enough to keep Mom and Dad nervous for most of the three days we were here. According to her, Joshua Tree is the very best national park we’ve visited thus far. If it wasn’t so cold at night, we would have been perfectly happy to stay the week.

Grandma and Grandpa, please look away

Indi surveying the campground from above

We made it on three different hikes, not counting the smaller viewpoints and turnouts. The first was at Skull Rock, where we ventured off trail to do a little scrambling and discovered a man-made rock garden, created by a group of creative (and at least 1 juvenile) spirits. 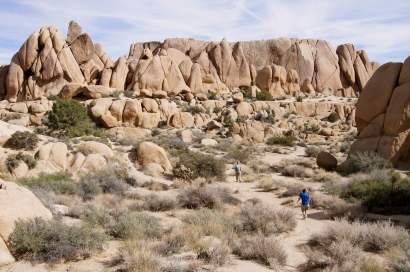 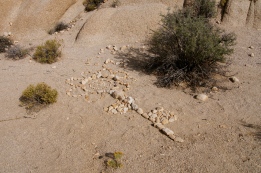 There’s always that one guy

Our second hike was to the Wall Street Mill where gold ore was most recently processed (separated from the rock it was in) in 1966. It was a beautiful contrast of natural scenery and man-made skeletal artifacts, testament to man’s desire and failure to domesticate the wild landscape of the desert.

Our final hike was a trek up Ryan Mountain and one-thousand feet of elevation gain to a windy summit with spectacular 360 degree views.

Hard work getting to the top I guess

The visit to Joshua Tree National Park wouldn’t be complete without a tour of the visitor center, watching the information video, and asking the rangers our burning, unanswered questions. Of course, we all wanted to know how Joshua Trees got their name. According to the animated ranger, when the Mormon settlers came into this area and spotted their very first trees, they thought it was the prophet Joshua welcoming them.

All in all, an amazing stop. Next up, Death Valley!