After an amazing month spent driving south through Montana, Wyoming, and Colorado we have reached southern Utah. Unlike the rest of the journey up to this point; Moab, Arches, and Canyonlands National Park are places Jason visited, albeit 22 years ago with a group of college friends. Jason and friends spent several days backpacking through Canyonlands where he almost succumbed to dehydration after running out of water on a 100+ degree day before being rescued by a generous group of rafters on the Colorado River. Good times.

We decided to live it up for a couple nights with showers, wifi, and even a community kitchen for a couple of nights at ACT RV Resort in Moab. The downsides: expensive (at least for us) and right on the road (loud). The creature comforts were nice but after two nights we eagerly moved on to a BLM (Bureau of Land Management) campground, Kens Lake, about 10 miles out of town. Surrounded by dramatic rock formations, a babbling brook that ran adjacent to our camp site, a waterfall ¼ of a mile up a trail from us, and nearby Ken’s Lake (which Indi and Jason tried to briefly swim in while Wendy lifeguarded on the beach), we decided this was definitely our best camp spot of the trip thus far. This is probably why we stayed six nights here! 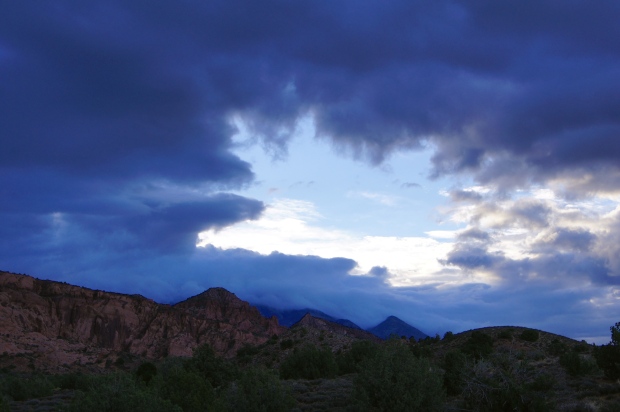 Sunrise at our campsite

When first arriving in Moab, we were greeted with 85-degree weather and decided to take advantage of the heat and book a rafting day trip on the Colorado River. To our delight, our bus driver Davin regaled us with stories about his skilled exploits as a stand up paddle board entertainer. Some of his songs were reminiscent of The Band of Larrys’ “Fire Drill”, which made us think of our good friends in Warsaw once again. During the morning, it was just us and our river guide Lisa, a former NYC actress who entertained us with a spot-on Patsy Kline impersonation. Several other rafters from all parts of the world joined us in the afternoon. Indi was pleased with the addition of a couple of other tween girls as they spent the rest of the afternoon daring each other to “ride the bull” through rapids and to jump into the river. Although the rapids were tame at this time in the year, the gorgeous weather and scenery more than made up for it. We highly recommend Canyon Voyages Adventure Co. if you’re in Moab and want to book a great company.

To hike the wilderness, we made two trips into Arches National Park. The first was to the popular (read: crowded) Delicate Arch, a three mile hike to probably the most well known arch in the park. We were so lucky to go when we did because a flash flood closed the road for the next week. Although we’re not big fans of crowds, it was a very cool hike.

Our second hike was through the “Fiery Furnace”. If you haven’t hiked this area before, it is a must because it’s an area of the park where you need a permit to enter, or to go on a hike led by a ranger. There are no trails and it isn’t hard to imagine getting lost among the narrow slot canyons and rocky spires. Our ranger guide told Indi about one guy who had his own permit and tried to jump from one side of the cliff to the next, fell, broke both ankles, and had to be flown out via Life Flight on his dollar. This hike was probably the best one of our trip thus far, which is saying a lot! First, since access was limited, there were few other hikers other than our group. There was dramatic scenery, narrow passageways, and chasms that needed to be leapt across. Best of all was our ranger, Alison. Indi took a liking to her and was attached to her hip, peppering her with questions during the entire three hour hike. She is still giving us facts about Arches!

Trips to Canyonlands and Dead Horse Point State Park provided some of the most dramatic views we encountered during our week here. And our second best hike of the week came not in a national park, but on the not-so-politically-correct trail “Negro Bill Canyon”  (although this is a whole lot better than its originally name) back to a natural bridge. 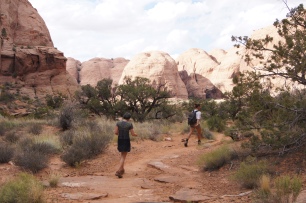 The city of Moab provided its own entertainment. We were able to eat some good meals, visit Moab Brewery, do a little bowling and Jason slipped away to watch a bit of football while Wendy and Indi splurged on a Sunday brunch at Red Cliffs Lodge. We also discovered a great city library where we bumped into former colleagues, Mark and Betsy Gathercole, who we taught with in Jakarta. Can you say small world? Probably our best city experience was attending Reel Rock, a rock climbing film festival where there was also a tribute to Dean Potter, a Moab resident who died while BASE-jumping in May. We all loved the films they showed and getting a glimpse into the rock climbing subculture that is so prevalent in Moab. We thought of our good friend, Scott Barber, once again, and how much he’d love it here.

Next up… Mesa Verde, Monument Valley, and the Grand Canyon. Bring it on!